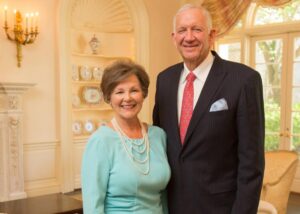 Dr. Sloan has served numerous churches throughout Texas and beyond.  Dr. Sloan brings with him his wife, Sue, who is herself a graduate of Baylor University.  Mrs. Sloan serves as the First Lady of Houston Baptist University, and works directly with students, donors, alumni, and guests of the University.

Dr. Sloan is the author of numerous articles and other published works, including the first three volumes of a young adult fantasy series (the Hamelin Stoop books).  He has received prestigious awards and has held membership in professional societies, including the Society of Biblical Literature, the Southwest Biblical Seminar, the National Association of Baptist Professors of Religion, and Studiorum Novi Testamenti Societas.

Dr. Robert B. Sloan, Jr. was born in 1949 in Coleman, Texas, and grew up in Abilene.  He is married to the former Sue Collier of Cisco, Texas.  The Sloans have seven children, three daughters-in-law, four sons-in-law, and twenty-two grandchildren. 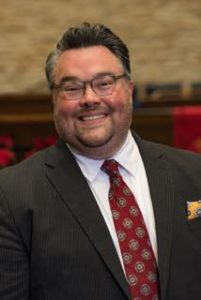 Edward Crowell is a fifth-generation native Houstonian, and has served Baptist Temple as Director of Music since January 2016. He previously served this church in a similar role from 2005 to 2008, prior to founding Imperial Arts, Fort Bend County’s resident professional performing and visual arts organization in Sugar Land, Texas.

Edward is a graduate of Hardin-Simmons University where he studied applied voice performance and music theory and composition. He has performed as a soloist in opera and oratorio throughout the U.S. and Europe, and has served churches throughout Texas in music and worship leadership. He was licensed to ministry in 2004 and ordained in 2014.

Edward is a member of Phi Mu Alpha Sinfonia, the Hardin-Simmons University Board of Young Associates, various professional and musical organizations. He lives in Richmond, Texas with his wife, Robyn, and their family.